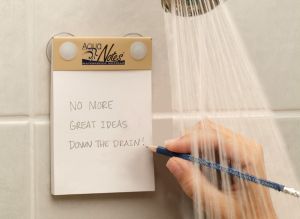 This post was inspired by a funky sort of cosmic pile-up in which I had several experiences over the past couple days all involving Muses visiting people in the shower.  Yes, writers are insane—more on that later.

First, Christine Bell and I were discussing on Twitter how we get ideas during the most inopportune times.  How can we write down our (assuredly brilliant) thoughts while driving (Christine) or in the shower (me)?  The next day, she tells me about these waterproof notepads.  On Sunday, my critique partner, Margeanne Mitchell, wondered on Twitter if she should remodel her shower to make room for these imaginary visitors.  And on Monday, my friend, Roni Loren, asked in a blog post: Why Is My Muse Hiding in the Shower?

See?  Cosmic weirdness.  And all this tells me that I’m not the only one with a pervy Muse.

As Roni talks about in her blog, we get our ideas when our logical mind is relaxed and the creative part of our brain can take over.  Our Muse visits us when we’re on autopilot:

[In] the shower, a monotonous car ride, lying in bed at night before [going] to sleep, listening to music.

And she’s absolutely right.  I’ve gotten ideas during all of those activities.  While normal people might plan their day during a shower, writers are planning how their antagonist can commit the perfect murder.  It’s true.  Writers are insane and I’ve got a blog post to prove it.

During my showers, new story ideas or scenes will play out in my head, or sometimes—when I’m really feeling the Muse—I’ll have conversations with my characters, just for the heck of it.  It’s a great way to learn more about my characters’ motivations and goals.

I have one character who thinks he’s a ladies’ man.  So it’s no surprise that this perv visits me in the shower.  Lucky for me, he’s usually just complaining about how many lines he’s getting (or not getting) or how I need to expand his character arc because he’s worried that my portrayal is making him look bad (apparently, my characters think they’re in a reality TV show and I’m the director choosing which footage to include).  In other words, he’s quite the diva.

But I learned more about his character than I would any other way.  I need my Muse to visit me—yes, even in the shower.  I need to get that inspiration I wouldn’t get from my logical brain.  So I just ignore the perviness of the situation and *ahem* imagine that my Muse is male.

Where do you get your best ideas?  Do you need to get some of those AquaNotes like I do?  Do you stick with logic and credit your creative brain for your ideas?  Or do you credit your Muse and imagine them to be a person/entity (or is that just me)?

In the shower? Yup. My muse is a perv and I’d have it no other way. 🙂 Although, I do have to say, I get a lot of ideas when I workout too – so maybe he’s only half a perv?

Mine’s definitely a pervy guy–hangs out in the shower, in my bed at night, keeps me awake. Of course, since I write EroRom, I guess a perverted muse is somewhat necessary. 😉

Yeah, just don’t try stealing my Muse or characters for your shower. I don’t care how big it is. 😉 And maybe your muse likes watching you work out…

Here’s to the pervy muses of the world! 🙂 Yep, and they’re sneaky – only hanging around when you’re by yourself.

Squee! I always wanted to take part in inspiring a blog post with the word “Perv” in it!
Chris <———- crossing that off her bucket list

SO, my muse is not nearly as fun as yours. She's only comes around when I have no way to quote her on anything, and she's sort of a bitch. She's all "Don't call me, I'll call you." and "It's not you, it's me. We just need some time apart." I want a genie muse who will come when I call, you know? Eh, whatevs. I write regardless. And sometimes, when she sees me messing things up bad, she'll jump in. "OH, hey, whatcha doing there? *reading over my shoulder* Wow, you need to stop whatever that is. Posthaste. I'll help, I'll help, just stop writing that drivel!"
So, for a wip, my muse plays hard ball. That said, I am INUNDATED with useless vignettes 24/7. Like, every one I look at is a story. My husband thinks it's hilarious. So in truth, I never stop mentally writing, and I never no where that first kernel of an idea is going to come from.
Great post!

Christine, Hmm, I wonder if that’s because my muse is male and yours is female? 🙂 Mine definitely doesn’t have the bitch thing going on. LOL!

But I know what you mean about how you’re always constantly mentally writing. People watching is great. With just a facial expression, I can weave a whole story and background for the people as characters.

When Is Faking It Okay? | Jami Gold, Paranormal Author

[…] disclosing in my last post that my Muse is a perv, he’s been rather quiet.  So apparently he’s also shy.  Or the strong and silent […]

[…] while taking my shower, when my muse ambushed me with thoughts for this post instead.  (Yes, he’s a perv.)  I tried to ignore him, reminding him that I have a deadline for submitting my manuscript to […]

On my daily walks, sometimes one of my characters will pop into my mind with something like, “Excuse me, I have few thing things I need to clarify . . ” I love it when they do that.

Yes! Walking is another great time to hear the muse. With one of my characters, I once got into a psychological discussion on the nature of reality while walking. LOL!

Do You Have a Muse? | Jami Gold, Paranormal Author

[…] why I treat my subconscious like an entity, talking about my muse visiting me in the shower or me dragging him out of bed to get to work, because I-me is my conscious thoughts and my muse is […]

Hey Jami, I found your “muse” post via google and followed it here. I have to wonder… how do you become so aware of your characters that you can easily have conversations with them instead of simply forcing things and running the risk of conclusions being artificial?

That’s a great question! Some of my characters speak louder than others. In fact, my main character doesn’t talk to me that loudly. She refused to tell me what happened in one scene (she was embarrassed). Luckily, another character witnessed the event and was able to tell me what happened. Once I started writing out the scene, she surrendered and corrected me on the details. 🙂

So you can try writing out your best guess and pay attention to any reluctance from your subconscious/muse/characters to let you know when you might be heading in the wrong direction.

Oh yes! It’s been a standing joke here for ages that confer with my muses and/or get my best ideas when I’m in the shower. I will have to get one of those waterproof notebooks. Thank you! 😀

You’re welcome – Happy to help. 🙂 Thanks for the comment!

Sometimes my muse is male sometimes female but either way they often bring one my story characters along with them. My muse tells me why he/she has brought the character and the character explains what I have done right or wrong.
My muse(s) pop up alone in unusual places; at a funeral, while I’m beinging intimate with my wife, while watching a movie, etc.
I never know where or when or if they have brought a guest with them.
Keeps things interesting and my story accurate.

Yes, my muse conversations sometimes warp into a conversation with one of my characters as well. They definitely keep us on our toes, don’t they? 🙂 Thanks for the comment!

[…] unusual search strings amuse me (“muse pervert shower writer” is my favorite—why yes, I did write a blog post about that), the number one search term that brings people to my blog is my name.  People have come here […]

Waterproof ideas and how to avoid running wet and naked through your home « Howalt: A Writer's Blog

[…] tend to have quality time with my muses in the shower like Jami Gold does. Perhaps it is because my head is not busy with anything else and the most interesting thing […]

[…] this one because it’s my favorite search term for my blog—ever.  Especially because I completely deserve it.  *snicker* (Too bad, Muse.  Deal.  You’ve got a reputation now.  *Muse glares at […]