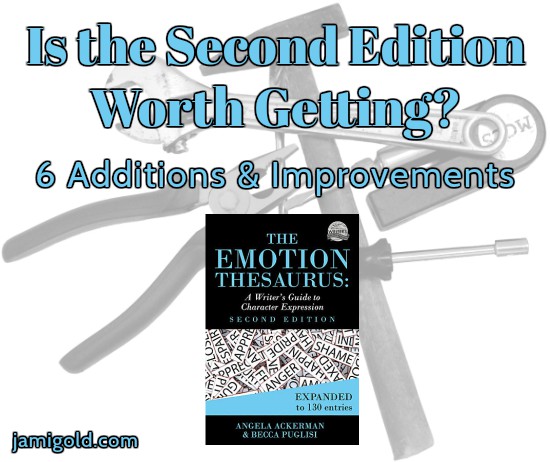 Today’s an exciting day because I’ve been helping Angela Ackerman and Becca Puglisi at Writers Helping Writers keep a big secret, and now I finally get to share! If you don’t know Angela and Becca, I hope you recognize the name of their most famous book: The Emotion Thesaurus.

If you’re not familiar with The Emotion Thesaurus, it lists physical, internal, and mental responses we can use with our characters for different emotions. In other words, all that showing instead of telling we’re supposed to do? The ET has our back, and I literally use the information in it every day I write. Suffice it to say that I love this book. *grin*

In fact, I wrote a whole post about four common writing problems we can fix with The Emotion Thesaurus:

So, what does all that have to do with Angela and Becca’s “big” secret? I’m now able to announce what the next book in their thesaurus series will be! 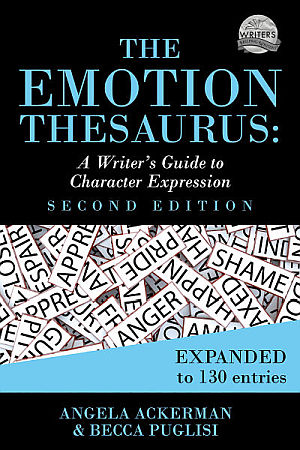 Whether you’ve heard of the original Emotion Thesaurus (or have a copy) or not, it’s been seven years since its release in 2012.

Thanks to its awesomeness, it quickly became the go-to guide on expressing character emotion. The book’s lists of body language, thoughts, and visceral sensations for 75 emotions made brainstorming character expressions and reactions so much easier.

However, just like the rest of us, Angela and Becca’s knowledge grew over the years. They thought of new responses, new entries, and new writing tips they wanted to include. So they decided to revisit the already amazing original book to see how they could make it better.

6 Ways The Emotion Thesaurus Second Edition Is New and Improved!

Like many writers, I have the original ET, so that of course prompts the question: If I have the first edition already, do I need the second edition?

If we already have The Emotion Thesaurus, should we get the Second Edition? Click To TweetWell, the original edition was 168 pages and the second edition is 296 pages (PDF format), so obviously, there’s a lot of new information that I’m excited about. That said, “need” is a matter of opinion, so let me share instead the six ways I’ve already found that the second edition is worth having… *grin*

(Yep, I was lucky enough to get an ARC, so I already have my hands on the second edition. Woo hoo!)

There are tons of words for emotions in the world, so with “only” those 75 entries, they obviously weren’t listing every emotion we might need to reference in the original edition. While we could often find a close emotion, sometimes we couldn’t.

In this second edition, Angela and Becca have added 55 entries, bringing the total to 130 emotions.

Find the full list of included emotions here. The new entries include several emotions that aren’t anywhere close to the previous ones, giving us new paths to explore for our characters and their responses.

If you’d like a preview of some of the new emotions, check out the entries for Euphoria, Schadenfreude, and Vindicated on their Writers Helping Writers site. (And if you want to know all the new entries, I’ve listed all 55 in the comments.)

Improvement #2: Expanded Details for All 130 Entries

In addition to those 55 additions, they also updated the previous entries with clearer descriptions and cues. More importantly, they added new sections to all 130 entries.

6 ways The Emotion Thesaurus *Second* Edition is new and improved... Click To TweetThe first edition included suggestions for “May Escalate To” emotions for each entry. For example, they pointed out that Anger may escalate to Rage, so if the details for one emotion didn’t quite fit our character or situation, we could check the related entries.

With the second edition, they added “May De-Escalate To” for every entry, including the original 75 emotions. For example, Anger may de-escalate to Frustration.

Plus, all 130 entries now have suggestions for Associated Power Verbs. The power verb suggestions might help us with our word choice when trying to include our showing descriptions for our character’s emotions. For example, Anger‘s suggestions include: blaze, flare, redden, seethe, tremble, etc.

One thing Angela and Becca have done with their later Thesaurus books is include a lot of writing advice and tools in addition to the thesaurus entries. The original ET, being their first book, was a bit lighter in that regard than their later books.

To address that lack, the second edition includes four new sections and updates the two old sections at the front of the book. (The previous Introduction has been updated into “The Power of Emotion” section and the section with tips on “Writing Nonverbal Emotion” has been slightly reworked as well.)

Taken together, these advice sections walk us through the process of developing our character from an emotional perspective, finding their emotional voice, and discovering all the ways to express their emotion while drafting. With the emphasis on deciding how our character responds unlike any others, the advice helps us create and develop unique characters. *smile*

The new section “Character Research: What to Know to Write Authentic Emotion” gives us a solid foundation on understanding our character well enough to know how they express emotion different from all other characters.

The new section “Using Dialogue to Write Emotion” helps us understand how a character’s emotions can affect their dialogue.

The new section “Subtext: What Lies Beneath” shares tips on how to include subtext to hint at emotion. This is especially important when we need to show that a character thinks or feels the opposite of what they say.

Even with all those 130 entries, we might still feel like we fall back on the tried-and-true descriptions too many times. The new section “Additional Ideas for Brainstorming Fresh Emotion” lists several ideas for how we can gain new perspectives on emotions.

Great! How Do We Get a Copy?

There you go, all the information I can think of to help you decide whether you should grab the second edition. Let me know in the comments if you have any questions about the second edition or these new sections or improvements.

The Emotion Thesaurus Second Edition will be releasing February 19th, and it’s currently available for preorder at:

Additional retailers (and the PDF version) will be available once the book releases.

(If you like getting craft books in print, click over to Amazon, Indiebound, or Book Depository. However, one thing to note is that the ebook version adds links to those “May (De-)Escalate To” emotion suggestions, making it easy to bounce between our options. Personally, I’m tempted to get both versions. *grin*)

If you preorder this book, send a screenshot of the order to their special email address, and you’ll receive a bonus PDF of entries that Angela and Becca completed but chose not to add to the 2nd edition! (Use the Cntr+Alt+Printscreen buttons or a “Snipping Tool” app to grab a screenshot of your preorder information.)

And… Until the end of February, Angela and Becca are giving away a free webinar recording of one of their popular workshops on emotion: Using Emotion to Wow Readers. So head over to their official announcement and check out the webinar link if this is an area of struggle for you.

I’ve said before that learning how to show emotions was one of the last big skills I struggled with before my writing was publishable, and years ago, Angela and Becca’s insights were the key to helping me past that hump in my learning curve. I’m thrilled they’ve taken the time to add their latest knowledge to this book, and I hope it helps others as much as it’s helped me. *smile*

Do you struggle showing your characters’ emotions? Or did the first edition of the ET help you already? Are you thinking of grabbing the second edition? Or do you have questions before you make your decision? What do you think of their announcement—are you excited for this release?

Ah, good! I was missing some of those… but I found clues elsewhere 🙂

This is one of the best writer’s aids I’ve ever used. It’s one of the few books I refer to every time I write or edit.

Jami, this is terrific how you have outlined all the areas that are new so people know exactly what they would find in the second edition that isn’t in the first!

And, one thing I’d like to add that we didn’t change is the book spine. When we redesigned the cover we kept this the same so that when it’s on your bookshelf, it will match all the other covers. It’s a small detail, but we know this can be a complaint when one cover is redesigned in a series of books. We writers like things to match. 🙂

LOL! This is so true, Angela. 😀 We like matching covers–or at least spines. 😉

Thanks for letting us know!

Thanks so much for this breakdown, Jami. What a wonderful way to highlight our new book. I’m so glad you found the changes helpful!

I have the first edition on my desk and use it often – well-thumbed. I’ve ordered the Second Edition (and done a blog post) and I’m excited after reading your review, Jami. Angela and Becca have added everything I need and so much more. Roll on February 19th.

This is a terrific book. I use it and the others in writing. Glad to see a 2nd Edition!!!

The Emotion Thesaurus is my favorite reference — I use it more than any other writing book on my shelf. Thank you so much, Jami, for giving us an overview of what’s been updated/added. I’m definitely going to order this new edition!

[…] feedback as to whether you should upgrade your edition, we recommend this 1st vs. 2nd edition book comparison by Jami […]