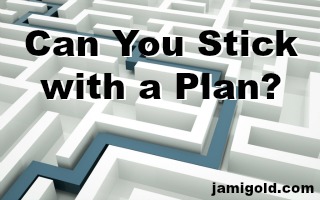 Yesterday marked the release of my fourth book, Ironclad Devotion, and I think I’m going to collapse now. From 0 to 4 books published this year. *whew*

I couldn’t have done it without the support and cheering from everyone. The warm fuzzies were abundant yesterday, so excuse me a minute while I hug you all. *squishes you silly*

This release marks the end of my “master plan,” also known as my daisy-chain release schedule. I first came up with that plan about a year ago, as I had four stories completely written and wanted to think of the best way to release them.

I came up with a plan that, in my head, I alternately called “daisy chain” or “leap frog” as I was thinking it through. Basically, I always wanted the next book to be available for pre-order in the backmatter of the current release, so readers of each novel would be able to buy the next one right away.

Great plan—except for the fact that my year would be taken over by editing four books and getting them ready for publication. I’m also following the traditional publishing system of at least three rounds of editing, so that was a lot of editing this year.

And by “a lot,” I mean “Ugh! My eyeballs are bleeding, and I hate everything, and just shoot me now” amounts of editing. All. Year. Long.

…and My Plan Was Difficult…

There were more than a few times this past year when I thought I wouldn’t have the next book ready on time. Steps took longer than planned, schedules had conflicts, emergencies caused panic, etc.

For as organized as all of these releases might have looked to a bystander, I felt on the verge of chaos most of the past year. I know plenty of other authors release multiple books a year, so I hate to harp on this for fear of sounding whiny, but this was a big deal for me because…

While other authors might release four books a year without batting an eye, this year’s release schedule about broke me. By this fourth book, I was at least two weeks behind schedule at every stage. Luckily, I’d built in a cushion on my timelines, and my team of editors, cover artist, and formatter were wonderful in helping me get it all done.

…but Wow! It Worked!

So now I’m in this zone of teetering between awed that it actually worked and relief that it’s over. I’m betting at least some of you understand.

I think we’ve all made grand plans for our lives at some point in time, and often they don’t turn out how we hope. Maybe we lose our motivation partway through, or we don’t have all the skills or resources we need, or maybe we have setbacks that keep us from moving forward.

So when one of those “grand plans” actually works? Yeah…we should celebrate. *grin*

However, as I said, I’m also glad it’s over. While it would have been nice to keep that chain going, trying to fit in writing time this year was quite a trick. (Read: impossible)

I had hoped to finish writing the next story during my vacation in July, as that was supposed to be my one break from editing. But when my whole extended family got sick during that trip, the extended-dance-remix version of my plan to continue the daisy-chain plan with a fifth book didn’t happen. Oh well…

I knew the chain of linked pre-orders would be broken sometime, so I’m simply moving forward on a more “normal” schedule now. The next book in my Mythos Legacy series, Stone-Cold Heart, will be releasing next spring.

It’s not ready for pre-orders yet, so if you’re a reader of my fiction, make sure you’re signed up for my New Release mailing list to hear when it goes on sale. But for right now, let’s give this final book in my daisy-chain schedule its due…

Ironclad Devotion is the third full-length novel of my series. Like the other books in the series, this is a standalone story, and the whole series can be read in any order.

I mentioned earlier this week about how much research this story needed, but it all turned out so perfect and gorgeous that I definitely think it was worth it. *smile* 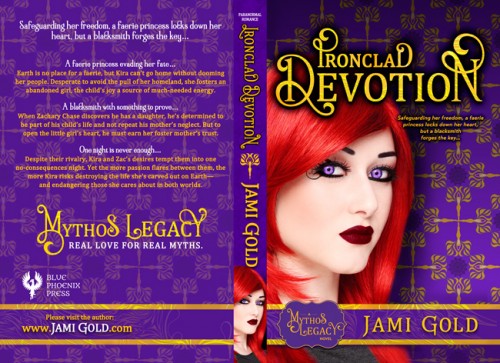 Safeguarding her freedom,
a faerie princess locks down her heart,
but a blacksmith forges the key…

A faerie princess evading her fate…

Earth is no place for a faerie, but Kira can’t go home without dooming her people. Desperate to avoid the pull of her homeland, she fosters an abandoned girl, the child’s joy a source of much-needed energy.

A blacksmith with something to prove…

When Zachary Chase discovers he has a daughter, he’s determined to be part of his child’s life and not repeat his mother’s neglect. But to open the little girl’s heart, he must earn her foster mother’s trust.

One night is never enough…

Despite their rivalry, Kira and Zac’s desires tempt them into one no-consequences night. Yet the more passion flares between them, the more Kira risks destroying the life she’s carved out on Earth—and endangering those she cares about in both worlds.

Click here for the latest links, or add it on Goodreads!

Want to grab some of the fun teaser quote images
featuring Kira, my motorcycle-riding faerie princess?
Check out the Ironclad Devotion page! 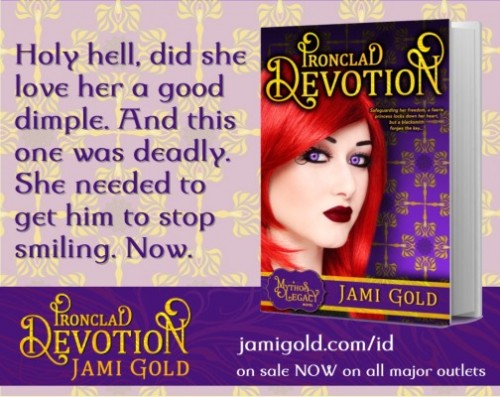 Thank you for sharing my journey with me, and I hope any grand plans you have will work out too! *smile*

P.S. If you’ve read any of my books, have you left a review? *grin*

Do you ever make big, months or years-long plans? Have any of them succeeded? How did you make it happen? If they didn’t succeed, what got in the way? Are there any accomplishments you’re proud of and would like to share?

Thumus! You got it. Congratulations!

Congrats, Jami! You did it!

Not to rush you or anything. 🙂

Thank you! And yeah, I want to find out how that story ends too. 🙂

Congrats! It sounds like a monumental effort and I hope in the long run it pays off. Waiting until you have multiple books ready is highly recommended these days, and I guess I am following in your footsteps, trying to get three books ready before I self-pub my debut. At least I have your blog posts to help guide me through the process, and for that I thank you. Wishing you much success!

Thank you! There are definitely pros and cons to this approach, and it doesn’t come with a guarantee of anything, but I think for me, it worked better than approaching these releases piecemeal. Let me know if you have any questions for your own plan. 🙂 Thanks for the comment!

Great job! It’s a lot of work. I’m slow, too, and I’m trying to get 3 novellas ready to go at once. Making lists, etc, but sometimes I feel very overwhelmed! I do a lot of editing, too.

Thank you! Yes, and I tend to write long (gee, just like my blog posts–LOL!). My novels are 95-101K long, so I write long and slow. I’m doomed. 😉 Good luck with your plan, and thanks for the comment!

Congratulations, Jami! I’ll be doing something very similar in 2016, with releases Jan 1, March 23, May 10 and July 25. Mine aren’t all part of a series (the first 2 are, third book isn’t done yet). So happy to know it can work. I hear you on the deadline issues. I’m going through the same thing.

Pour yourself a glass of wine and relax. You totally deserve it!

LOL! Thanks! And lots of chocolate I think. 😉

Good luck with your plan–that sounds great! 😀 Thanks for stopping by!

I had some truly grand plans about two years ago, but some very devastating things happened and i was kind of side-lined. I finally got my book together and did the cover and had it professionally formatted and edited and all that good stuff and now i’m releasing it tomorrow!
I’m thrilled, truly I am, but I’m also worried. I don’t have a back list right now. I don’t have a bunch of books for readers to gobble up (fingers crossed) after they read this one (more fingers crossed) I’m worried I’m not doing it right…but…I’m also thrilled.
My husband had wanted me to finish my novel before he passed away. I did that. He had also wanted me to pull myself together and get it published as soon as possible (he knew he didnt have much time and he wanted me to work hard on my dream) I’m, wow…tearing up right now.
I miss him so much, every single day, but I know he’s proud of me. I am following my dream and that’s all he ever wanted for me.
I’m so thrilled for you, Jami.
So truly and profoundly thrilled for you.
I hope your dreams are coming true. I hope they continue to come true.
I adore you and hang on every word you say.
Have a wonderful weekend!
Tamara

Yay! Congratulations! 😀 And please don’t worry about it–there’s not “one right way” to do this. 🙂

I’m so thrilled for you. LOL! I’m so glad that you’re moving forward with your dreams. I know the past couple of years have been awful for you, and I’m glad that you’re overcoming it, one step at a time. I hope you get the good things you deserve coming your way. *hugs* Thank you so much for stopping by, and congratulations to you! 😀

This is a huge accomplishment and you have every right to be proud and to celebrate! I know it’s been rough, but you did it and the books are wonderful. ^_^ Just remember to take care of yourself and recharge.

Aww, thank you so much! *hugs* Yes, I’m looking forward to NaNo to relax and write. LOL! Thanks for coming by! 🙂

That definitely must have been exhausting and overwhelming. D: I don’t think you’re being whiny at all! But congratulations that you are now a multi-published author with four books. 😀

Thank you! It was exhausting–LOL! But I also know other authors who have done the same, so I didn’t want to make such a big deal out of it that I implied that I’d achieved the impossible. 😉 Thanks for all your support!

Wow, Jami, that’s fantatastic! You’ve got a lot more patience than I do – I just had to get #1 out when it was done and then start working on #2. Of course, I had planned to do the one and then shift genres, but finally gave in to the fact that I really needed to get the trilogy done before starting something new. My #2 comes out in January, hopefully #3 will be done in the fall, and MAYBE I’ll be able to work a plan like yours for the next set.

Congratulations, and I’m glad you’re going to get a bit of a break now!

Thank you! I don’t succeed with many “grand plans,” so that’s partly why this one was such a big deal. LOL!

But as I’ve said, there’s no “one right way” to do this and succeed, so no one should feel like they need to follow my example. 😀 Good luck with your plan, and thanks for the comment!