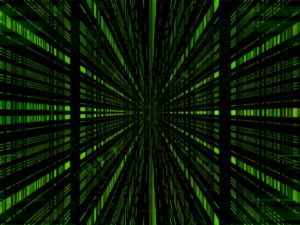 Last time, I explained how to avoid dumping information into stories and how dialogue is often used incorrectly to convey details to readers—the “As you know, Bob” technique.  It just so happened that my friend Simon C. Larter posted a related article with info dumps in dialogue that worked that same day.  Great minds and all that.  *cough*  Okay, well, he’s got a great mind.

His post makes for interesting reading, but if you don’t go check it out, here’s some of what he had to say:

[D]ialogue can be used to communicate action in your narrative … I’ll pull two examples from my Stilettos & Shirley Temples post on [last] Monday by way of illustration. Check it:

She gives me a sidelong look as she adjusts a diamond stud earring. “Want to get your feet off the coffee table?”

“Nope.” I take a sip and lean against the soft couch back.

I swill the last of my vodka. What have you dragged me into, Mercedes? “I need a refill.”

“Maybe put something other than a towel on, while you’re at it,” she calls after me.

I don’t. She rolls her eyes when I step back onto the balcony.

Okay, I should note that I never mentioned (a) that I had put my feet up on the coffee table, or (b) that I was wearing nothing but a towel on the balcony.

See how brilliant he is?  I think many writers avoid this technique because we’ve seen it so poorly done that we think it can’t be done well.  Imagine a sci-fi story with dialogue like, “Oh no, the monster has almost caught up to us.  Watch out for his teeth!” *cringe*  That reads more like an old-time radio play than a modern novel.

But Simon is right.  His examples do work.  Why?  After spending some time thinking about why some dialogue info dumps work and so many others don’t, I finally realized something.

Everyone here has seen the movie Matrix, right?  When Neo needs a gun, he imagines there’s a gun someplace and suddenly—poof—there it is.  Readers’ minds work the same way when they’re reading.

I’ll say it again this way: Readers’ minds are malleable.  They will imagine whatever the author tells them to imagine, not only with dialogue, but with narrative as well.  Details of the setting and action can change mid-scene and they’ll happily go with the flow.

This is a great technique for writers to use for description.  Instead of feeling the need to give the full picture of the setting at once, writers can rest assured that the details can be added as needed.  And…  As Simon pointed out, these details can be woven into dialogue in addition to the narrative.

But there’s a trick to being able to change and add details mid-scene.  And that same trick will let you know when showing action through dialogue will work and when it would read more like a radio play.  In my next post, I’ll talk about how to successfully use this technique—and what to avoid.

Why thank you, good lady, for featuring my post on your blog! You’re a darling, for sure. 🙂

And I’d take the analysis a bit further with the towel thing, in a way I didn’t in my own post. See, a few paragraphs before the excerpt you posted, I mentioned that I was standing on the balcony letting the breeze cool the shower moisture from my body. Now, aside from highlighting my obsession with alliteration (did I have enough b’s in that sentence?), this communicates that I’d just gotten out of the shower, and probably wasn’t dressed yet. So when Mercedes makes the comment about the towel, it’s not coming out of a total vacuum. It’s kind of a multi-pronged method of communicating the information, yes?

I’m sure your elaboration tomorrow will be wonderful, my dear, just as this post is. I’m looking forward to it! 😀

Yes, good point, Simon. This goes back to the interweaving of information throughout the passage rather than dumping it all into one overloaded paragraph.

And thank you for the inspiration!

Great post! I’ve been trying to take a lesson from Simon’s book and cut my “she said” stuff down. I also had a scene in the following installment of S&ST where I had this huge song and dance routine going on while examining Simon’s tattoo and then his scar. It was all, “He turned to go inside and I saw the tattoo on his back, yadda yadda yadda, so I stepped around him in order to see the scar on his stomach…” It read like blocking to a bad musical. Know what I realized? Readers are smart cookies. They know that his spine is *gasp* on his back, and his stomach is *egads!!* NOT on his back. I didn’t have to explain in excruciatingly detail where my character was standing in order to get the best view. The readers will figure it out.

My writing group has a term for this unnecessary influx of blocking information. We call it “North by Northwesting.” As in, “He turned to face the breeze coming from the North. Actually, it was North West. Yes, he turned North and then slightly to the Northwest.”

Don’t write down to the readers. They’ll get it.

LOL! to the spine and stomach descriptions. Although, with as much as Simon drinks, maybe parts of his body have mutinied and moved to get away from his liver? 😉

Yes, I’ve worked hard to cut down on those over-writing aspects as well. My first drafts are full of lines like – She nodded her head. Really? Are you sure she wasn’t nodding her finger? *snicker*

My first draft was 136K words and I’m now down to 95K – much of that is due to cutting my overwriting. Word count is my nemesis. 🙂

My internal organs in revolt? Uh…okay, you probably have a point there. Touche, m’dear.

[…] Part One, I proposed my Matrix theory for describing action and scenes in stories and talked about why it […]

All good stuff.
Good one Simon! I love action in dialogue.
Laughing my ass off @Mercedes: spine/stomach.
Gee, where have I been the last couple of days? Holy Crap, I have to catch up!

Yep, the Part Two is up now too. Check that out. 🙂