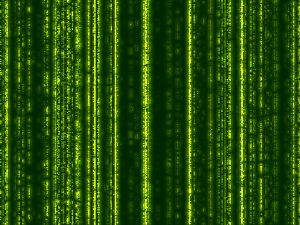 In Part One, I proposed my Matrix theory for describing action and scenes in stories and talked about why it works.  In this post, I’ll explain how to successfully use the technique to add details, both with narrative and dialogue—and how not to use it.

So as I mentioned last time, readers’ minds are malleable.  They will imagine whatever the author tells them to imagine, for both setting and action.  Details can be added mid-scene and they’ll happily go with the flow.

The important word there is details.

How NOT to use the Matrix Approach

There are many ways authors can misuse this technique—and every one of them will pull the reader out of the story.

First, it should be obvious, but I’ll mention it here anyway.  Do not use this technique to change a detail mid-stream if it’s already been established.  Unless the story world is meant to have shirts change colors for no reason, readers will notice continuity errors.  Adding details, okay.  Changing from A to B, not okay.

Do not use this technique to create the overall setting mid-scene, such as: indoor vs. outdoor, major weather factors like pouring rain, major physical factors like the character is uncomfortably tied up, etc.

All these aspects must be established at or near the beginning of a scene to anchor the reader in time and space, or else they imagine a couple of floating heads.  If the author changes major aspects mid-scene, the reader is momentarily pulled out of the story as their brain rewinds to re-imagine the entire scene with the new setting.

Similarly, do not use this technique with dialogue for major action or movement.  This issue is why some action-oriented dialogue sounds like a radio play.  After all, in a radio play, there is no visual aspect and often no narrator—the dialogue has to do all the heavy lifting.

What defines major action or movement?  For reasons which I’ll go into below, I’d say any action that involves the entire body of a character.  And movement in general is difficult because we expect sensory input from the character when they’re moving.  We’d expect a dialogue line like, “Give me your hand,” to be followed by a narrative description of the touch.

And definitely, do not use dialogue to break both of those rules and express full-body movements (“Look!  The monster is climbing that building!”) or else we’ll need some popcorn to go with that cheese.

How to Successfully Use the Matrix Approach

So how did Simon make it work?  In both instances, the details he added were small: where the character’s feet were and what the character was wearing.  These details didn’t require the reader to rewind and re-imagine, they didn’t involve the entire body of the character, and they weren’t describing movement.

Think of movies.  Much of the time, the camera is zoomed in on the characters’ faces.  Our brains work similarly when we’re reading.  We only “zoom out” to encompass the rest of the character’s body when the author tells us to.

We can easily imagine a movie playing in our head of two characters sparring back and forth (with the camera jumping between their faces) and then a quick cut to one character’s feet rudely scuffing up a coffee table before jumping back to their faces for a reaction shot.  Similarly, we can imagine two characters bantering on a balcony and as one walks away, we finally pan out to see his clothes (or lack thereof).

Movies do shots like these all the time.  Therefore, it’s no big deal for our mind to imagine the scene the same way.  So, mid-scene setting additions and dialogue action descriptions work when it’s for a minor detail that flows with the movie in the reader’s head.

Like I discussed here, the description of a scene shouldn’t be dumped all at once on a reader, and with the Matrix technique, we understand why we don’t need a paragraph describing every detail as soon as a character enters a room—that there’s a fireplace in the corner with two sofas in front of it, that the desk faces the window, etc.  These details can be spread out during the scene as they’re needed.

When a character complains about the room being too hot with the roaring fireplace, the reader will adjust their mental picture to include a fireplace.  Or when one character says to another, “What’s with the cast?”, the reader will add a cast onto the other character’s limb in their imagination.  Poof—just like the Matrix, it’s suddenly there.

Can you think of examples where mid-scene changes worked or didn’t work?  Or what about examples of dialogue with action?   Why did it work for you?  Or why didn’t it?

Oh, very good points, good lady! I muchly agree that the major details of location and situation need to be established early. Other things can be woven into the narrative or dialogue as needed. It’s a stylistic choice, to be sure–literature of a different era would spend pages detailing room furnishings, dresses, character notes, etc., before getting into the action–but for our hyperkinetic, short attention span society today, minimal details dribbled out over several pages’ worth of action seems to work quite well.

Thanks again for the mentions and links, good lady! 🙂

Yes, the stylistic choices of the past don’t play well with the modern reader – myself included. I originally had paragraphs of description in my WIP, but every beta and critique reader said they just skimmed over those parts. Once I thought about it, I realized that I did the same thing. Cutting ensued. 🙂

What about supplying information through interior monologue. I had a scene where my MC hated a particular character. Her outward tone and manner hinted at this – but her thoughts cemented her feelings to the reader when she did a mental:
Ha! And who the heck was he trying to impress with that pretentious cane?
The cane was never mentioned again, but the click it made when he walked away, was. Cool, I never thought about it like that before.
You’re so smart! 🙂

Yes, great job, Murphy! That sounds like a perfect example of sneaking details in using interior monologue. 🙂 Poof! You performed magic – with a cane even. Ooo, was it a magical cane perhaps? LOL!

More like magic mushrooms. Actually, the character was based on ONE of my mother-in-laws (that’s right – I’m lucky enough to have two of them…hence, the mushrooms 😉 ) boyfriends. And, can I just say, there is nothing more pretentious than a perfectly fit guy walking with a cane he doesn’t need! Whenever I saw it/him, I wanted to smack him with it. Of course, he was the one who told me that there was no such word as pontificating – his reasoning? It wasn’t in the British dictionary…Wow! Who knew?

LOL! Wow, what a … er, winner. Yeah, that’s it. Sounds like a great inspiration for a character though. 🙂

Brilliant! I once used a Matrix analogy myself as part of a workshop on setting. I used the idea of beginning with the basic construct, essentially a blank pallet, and layering in details, each of which has a significant purpose and meaning. The lady in the red dress was not just scenery, was she!

Allison, so good to see you here!

Oh, yes, I’d forgotten about how they used that great word – construct – in the movie. Like you said, it’s the blank slate to layer and build upon with meaningful details.

That’s been a big part of how I’ve cleaned up my rambling descriptions – look at what would catch the POV character’s eye and figure out why. The ‘why’ is more important than the ‘what’ sometimes. Thanks!