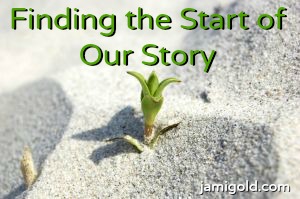 A lot goes into deciding how to begin our story. We have to introduce the characters, the story, and the setting. We have to make it interesting, not confusing, or not accidentally misleading. Etc., etc., etc.

If we think about it too much, we might seize up and not write anything. The sight of that blank page can paralyze writers, preventing them from making it past the first line or the first page. It’s easy to want a story opening to feel perfect before we move on.

Most writers have probably struggled with some element of a story’s beginning. With my current work-in-progress (WIP), I debated between several potential openings before I typed a word. In another story, I knew the opening scene, but not how to tie it into the rest of the story. In yet another story, I knew everything about the first page, but I kept emphasizing the wrong elements.

Er, yeah, I think it’s safe to say that story beginnings can be tricky. *smile* As I recently had to figure out solutions to all those problems, now seems like a good time to share some tips.

The Three Aspects of Story Beginnings

A great story beginning will work on three different levels. Think of them as the big picture, the medium picture, and the close-up picture.

Start on the right note. In my WIP where I debated between several possibilities for a beginning scene, I finally decided based on the big picture. Which scene led best into the story’s main conflict? Which scene best showed the character in the situation that would kick off the right emotional arc and theme?

The first notes should flow to the next. In my story where I had a strong idea about the opening scene but wasn’t sure how to tie that to the rest of the story, I had to fill in the blanks. How could I get from Point A (the opening image) to Point B (the Inciting Incident that kicked off the story)? Often this means trying to move Point A as close to Point B as possible, starting just before something happens to the protagonist that forces a change or decision.

Avoid off notes. In my story where I knew everything about that opening scene but kept emphasizing the wrong elements, I had to get the draft close and then fix in revisions. By the time I finished drafting the story, I knew the right tone and thematic messages to emphasize. Then feedback about character likability and reader interest helped tweak the details.

The best story opening will likely succeed on all three levels. We can move from the big picture down to the specifics as we work on our story. Believe it or not, that means we could find the best beginning for our story in just three steps.

Today, another prize winner from my Blogiversary contest, ChemistKen, chose to have me over to his blog for a guest post, where I’m sharing tips on using these three aspects to find the right beginning of our story. Visit my guest post at Ken’s blog and learn more about using the three steps to find our story’s beginning!

Registration is currently open for my workshop on how to do just enough story development to write faster, while not giving our pantsing muse hives. Interested? Sign up for “Lost Your Pants? The Impatient Writers Guide to Plotting a Story.” (Blog readers: Use Promo Code “savethepants” to save $15 on registration.)

Do you struggle with story beginnings? Have you looked at story beginnings on these three levels before? Do you think that perspective can help us find story openings that work better? Does one aspect come more naturally to you than others? Or have you struggled with all of them?

Beginnings are definitely the hardest thing for me, and since they are what agents and readers look at first, I agonize (and panic) over them. I rewrite and rewrite to the point that I have no idea after a while if they’re any good. I like your approach and I’ll give it some thought. Thanks, as always.

Oh I know what you mean! I think that’s what happened to me with that one story that I kept emphasizing the wrong things. It’s not that I was trying to emphasize the wrong things. 🙂 But it’s so easy to focus on one aspect and lose sight of the rest.

Like I mentioned in the guest post at Ken’s, worst comes to worst, we can use this “big picture to close-up” method for revisiting our goals when we revise. (Note to self: Remember that.) 🙂 Thanks for the comment!

Thanks again for posting over at my website, Jami. Beginnings can make or break a book.

Thanks for picking that option for your Blogiversary prize! 🙂

And yes, you’re right–without a good beginning agents, editors, and readers won’t discover our book. Thanks for the comment!

The opening of a book is the hardest thing for me to nail. I think for my current WIP I’ve had at least 10 different opening scenes. 10! Finally, I feel like I’m in the right place.

It’s a balancing act. You can’t start too soon or too late in a book. (Duh!) And I believe you can’t even begin to evaluate your beginning until you finished a whole draft.

Years ago I used get in such a tizzy about the first five pages that I never finished anything. Now I just start. I can cut and revise later.

“I used get in such a tizzy about the first five pages that I never finished anything. Now I just start. I can cut and revise later.”

So true! Nothing we type in our stories is permanent until we want it to be. 🙂 Good luck with your beginning and thanks for the comment!

I usually wing beginnings. I spent some years starting stories and ditching them, so I have more practice and am more comfortable with beginnings. Endings? Not so much.

But there’s one story I keep starting and ditching, because I’m not sure how to structure it. I’m now thinking that my original structure was the best one, even though I had reasons for ditching it—reasons I’ve since come to realize had everything to do with trying to follow the “rules” and nothing to realize had little to do with the story I was trying to tell.

Choices, choices. I do know the trilogy attempt isn’t working very well, perhaps because the story itself means I have to start in the the middle of book 2 in order to build the rest around. :-/

Very true! So much of writing and revising is about figuring out the essence of the story we want to tell. 🙂

No wonder you’re struggling with that story–it definitely sounds like a unique premise. Good luck with figuring out how to make it work and thanks for the comment!

Having just, and finally, figured out where to start a new novel, I feel your pain.
I knew the story I wanted to tell, but couldn’t find the right scene to begin with. I started five different ways before it came to me, from then on the scenes flowed, almost, effortlessly.

I did, however, write down all the scenes I tried, knowing that somewhere along the way they’ll come in handy.

Good thinking to keep the old scenes! We never know when we might use bits and pieces of conversations, descriptions, or settings later. 🙂 I’m glad you found a beginning that worked for you and thanks for the comment!

Hey Jami! For story beginnings, I like to make sure that the starting scene has some sort of tension, conflict, mystery, crisis, or otherwise something negative and attention-grabbing in it. It’s important not to be confusing, but some of my favorite story beginnings are those where there’s a lot of mystery. E.g. a favorite book of mine started off with this young man who was always consumed by anger by some unknown cause. It was phrased a lot more elegantly than that, of course, but that negative emotion at the start grabbed my attention immediately. We have to note though that different readers have different preferences for beginnings. One story writing guide praised Book X’s beginning, yet when I came to read Book X, the first page was absolutely boring to me, and I only began to be interested when I reached the last sentence of the first chapter. Yikes. The page-turner-ness was very good after that though. Other examples (I actually made a long list of these types of effective beginnings sometime in the past. So I might as well share some here!): –Setting descriptions: I’m actually quite an impatient person when it comes to setting descriptions. When I see these in books, I tend to skim–yes, even a literary fiction fan can be that impatient with setting descriptions. XD The only time setting passages would engage me is if they convey a very strong NEGATIVE atmosphere. An Edgar Allan Poe style spooky/ominous setting is ideal for me. Or…  — Read More »

Yes, as you said, I think some sort of tension, mystery, or something negative is good for a first page. I just read the opening for a heavily-hyped book about to come out. At first glance, it seems like pages of what’s essentially info dump, but it was crisp, full of voice, and heavy with a sense of danger.

It’s not how I would have done it, but given the tone of the book, it works in the big picture. Like you pointed out, we’re all going to have different preferences as readers.

In looking at your great list, I think this excerpt would fall into the “Weird Quirk of Protagonist” and “Announce the Momentous Event” and maybe even a bit of “Dangerous, Life and Death Situation” categories. So yeah, I guess I can see why it works. LOL!

Hi Jami, this is another helpful writing post as always. I think writing the beginning of the story is the hardest part to get right. Endings come a close second. I have learned that I can’t figure out where my story truly starts until after I’ve written the entire story. So searching for when/how my story should start always comes in the editing phase.

Yep, and there’s nothing wrong with that process. Everyone is different as far as how much or what type of information they need to start drafting. (Witness the pantser/plotter debate. 🙂 ) Thanks for the comment!

How to Avoid a Sagging Middle in Our Stories | Jami Gold, Paranormal Author

[…] of us have great ideas for the beginning of our story. We might know how the characters meet or what forces the characters to get involved. We often […]

[…] Having trouble starting your story? @JamiGold […]