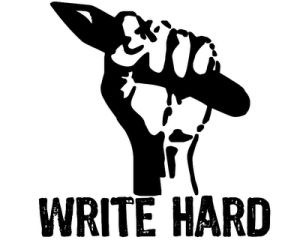 Sometimes it still comes as a shock to me that anyone visits my blog and cares about what I have to say.  So when I received my first blog award, I was completely unprepared.

My first thought was of being tremendously flattered.  I think my exact reaction was, Me? Seriously? That thought was quickly followed by gratitude to the giver.  And then I wondered what to do with the thing.

Others post their awards in the sidebar of their blog, but I knew that approach wouldn’t work for me because this blog also acts as my professional website.  Rather than deciding anything, I just thanked the giver and kept the award tab open to remind me to do something about it “someday.”

Later, a second award followed and then a third.  Soon I had a stack of open tabs waiting for me to decide something.

(And I’m really not bragging or complaining.  I appreciate every award I’ve received.  I’m just bad with decisions sometimes—who was I supposed to pass the award on to? what interesting facts could I share?  Besides, if you follow me on Twitter, you’ve heard about my addiction to internet browser tabs—4 different browsers and about 200 open tabs at any one time.)

Then I received the “Write Hard” award from my friend Mercedes M. Yardley.  This award was different.  This one wasn’t just about my blog.  This one was about me.

In the words of the award rules:

“Think: writers who work at their craft, writers who never give up despite the odds, writers who constantly turn out quality work. Writers you admire.

Wow.  I think I might have looked around for the Punk’d hidden cameras at that point.  Then I read what Mercedes said about me:

Jami consistently has some of the best blog posts that I have ever seen! Add that to a kick-butt manuscript and heart as gold as her name, she definitely earned this award.

*sniffle*  Yeah, this one I couldn’t put off until later.  So here I go:

The rules are simple.

2. List at least three writers who you feel live up to the “write hard” spirit. Think: writers who work at their craft, writers who never give up despite the odds, writers who constantly turn out quality work. Writers you admire. Optional: explain why you think they are awesome.

3. Include these rules or a link to them.

4. Notify said writers of their victory. Ask them to pass on the torch.

The list of writers who inspire me or who I admire would be huge.  Anyone who puts in the time and effort to follow through on their dream falls into that category.

So I narrowed down my list by concentrating on those who have done everything listed in number 2 above—and did it all while overcoming daunting challenges in their personal life.  Mercedes is at the top of that list, but I suspect giving it back to her would be against the rules.  Drat.

Now, what to do with the rest of the awards…

What writers do you admire and why?  How do you do handle blog awards?  Display them in the sidebar?  Add a separate page under FAQ or About?  Ignore them?  Do you have any suggestions for me?  *channels Wendy Sparrow and shakes you*  Help me!

Jami, congrats! You deserve it! I’ve received 9 or 10 blog awards, and I did display the first banner and pass it on. I’m grateful to everyone who has given me these, but I don’t have the space or time to continue with them. For now, I thank the giver on their blog as well as in a tweet so everyone knows how awesome they are!

Congratulations 🙂
And you deserve it and your blog deserve it too. Your posts are very interesting, I read them all and I agree, they are among the best blog posts I read. Your site is very well designed, the colors choice is excellent and it loads fast. (for a site to load fast is very important, at least for me :)).

Since you want to keep them on the site, you could add a separate page with awards. Not in the FAQ or About, just on their own.

Thank you! Of course, I’m now really feeling the pressure. 🙂 And I’m not sure I want to keep them on the site, so I’m open to all suggestions here. Thanks for the comment!

Congrats Jami! They are well deserved! I have no idea what to do with one, having never won anything like that.

Aww, you’ll get one, don’t worry. 🙂 Thanks for the comment!

What an amazing award, Jami! The description is so flattering and I must say I agree with the “turns out quality writing” again and again. Congrats on a fabulous award, and sounds like you returned the honor to some very deserving writers.

As for my award (yep, singular, I’m new. LOL) I just did a post on it and that’s all. I agree that I don’t care for it listed in the sidebar. It’s more of a fun social thing to me than something like a diploma. Does that make sense?

Yes, that makes sense. And I think that’s part of my reluctance to “deal” with the issue – I don’t want to come across as bragging. (I’m already cringing from all the “congratulations” here. LOL! I really didn’t write this post to dig for compliments.) But I also don’t want to come across as ungrateful or seeming like such things are “beneath” me either. Thanks for the comment – that helps clarify my thoughts! 🙂

Having just received my first award this week I’ve been puzzling with the same questions. I have considered doing a brief “off day” post and placing the award under my bio on the About page, but honestly am not sure at this point.

As for writers I admire, other than you Jami, of course, would be Kristen Lamb, Sonia Mederios, Jess Witkins, Piper Bayard, Kait Nolan and the list would go on for pages.

Congratulations on the award, I’m sure many more will be coming your way 🙂

Congratulations on your award! 🙂 And thanks for sharing your thoughts.

Yes, I don’t want to “display” the awards for bragging purposes or anything, but as those who read my blog know (or follow me on Twitter), I like giving shout outs to other authors. I frequently link to other people’s blog posts when I find relevant and/or interesting things. My urge to acknowledge the giver in some way falls into that same category, I think. Thanks for the comment!

Blog Awards are fun and friendly things. I have all of mine arrayed at the bottom of the main page, but after reading your blog post, I think I’m going to create a special “Hall of Fame” page and move them there. Instead of having the awards on the main page, I’ll have a link to the “Hall of Fame.” That’ll let me give them the space they deserve, but will make my page load a bit faster and look a bit cleaner.

LOL! Well, I wasn’t intending on trying to change anyone’s mind about their own site, but I suppose others might have been just as unprepared to receive an award as I was and hadn’t thought about different options. 🙂 Cool idea about a “Hall of Fame.” Thanks for the comment!

Congratulations on the Write Hard award. You deserve it!
I have a page on my blog where I list my awards. They are something to be proud of. As you said someone has taken the time to visit your blog and think you are worthy of the award. It is a really great feeling.

Thanks for the advice and comment. 🙂 I appreciate it!

Congrats on your blog award! You deserve it! I personally think you’re one of the best out there along with Kristen Lamb (knowledge and helpful galore!), Piper Bayard (informative & amusing!), and Roni Loren (more of the same).

I have won one (Stylish Blogger and it was just this month). I did paste to my side bar and link back to my fab friend who awarded it to me.

Aww, thank you! 🙂 And congratulations on your award too. Thanks for the comment!

I don’t have a blog…so I’ve never won a blog award. I’m still working up the courage to create my own author website and blog. I’m a little frightened. What if I have nothing good to say? What if what I say sucks? What if no one reads what I have to say?
Very scary:0
Your blog, to me, is a model of perfection. You deserve the awards you’ve been given. I visit and always come away learning something. Not only are you a fabulous teacher, but an inspiration as well. There has been many a time I’ve clicked onto your blog, read your wisdom and then immediately opened my WIP to write.
Congratulations, Jami!!! The Write Hard Award couldn’t have been given to a more fitting recipient.
Have a wonderful day!!:)
Tamara

Aww, thank you. 🙂 I still have that same fear every time the reminder pops up for me to write another blog post. I’ve heard published authors say the worry and pressure increases with each book, and I can definitely relate. Thanks for the comment!