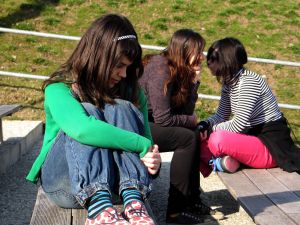 In the comments of my last post about how to make online friends, several people mentioned they had trouble jumping into conversations on Twitter, so I promised a follow-up post.  Believe me, I get it.  Many of my school years can be summed up by this picture—being left out.  Been there, done that.

Maybe that’s why I love Twitter so much.  Twitter lets you eavesdrop on all those conversations so you can easily jump in.  Really.  It’s okay to butt in.  This isn’t high school with all the exclusive cliques.  Twitter is a big mingling party.

Think about it, if those people wanted the conversation to be private, they’d take it to Direct Messages or email.  The absolute worst that will happen is you won’t get a response, and because Twitter is so busy, no one will notice but you.

Now that you understand how butting in is not only allowed but encouraged, the next issue is…

Look for tweets about things you can congratulate people for—a request from an agent, a sale, new release, birthday wishes, etc.   Everyone likes recognition and getting kudos.  Even multi-published authors will often tweet back a thanks.

Similarly, look for tweets about things people might appreciate a virtual hug for—rejections, bad news, being sick, etc.  Again, people like receiving support.  Just as much as you might be afraid all your tweets go ignored out in the wild twitterverse, so does everyone else.  Show someone that they were heard and they’ll appreciate it.

Instead of using Twitter’s web interface, use TweetDeck or a similar program.   TweetDeck allows you to do the old-style re-tweets (RT), where your Twitter ID is inserted into the RT.  The new-style RTs don’t display your name as obviously, so the original poster might not notice that you’d helped them out.  You want “credit” for your RTs, don’t you?

If you’re re-tweeting a link, add some words to say why—add value to the RT.  (This is another reason I like the old-style RTs, where you can edit the text before sending.)  Was it funny, informative, helpful, or inspiring?  (Yes, it’s okay in Twitter to edit someone else’s words to make everything fit into 140 characters.  As long as you’re not misrepresenting their meaning, no one will mind.)

When you really enjoy a link or tweet, in addition to retweeting it, you can @ reply to the poster and thank them with a note about what you enjoyed about it.  This goes along with the Positive Feedback above.  People like knowing if they made a difference to your day.

If you want everyone to see a reply, put other characters before the @ symbol.  If the @ symbol is the first character of the tweet (like when you hit Reply), only that person and your mutual followers will see the message (explanation here).  In other words, a message like—@awesomedude is hysterical! Everyone should follow him—wouldn’t do any good.  Only people who were already following you both would see it.  To make it work, put a period (.) first—.@awesomedude is hysterical!  Everyone…

Twitter Chats are normal tweets that all use an agreed upon hashtag (#).  With this common hashtag, everyone can follow the conversation even though they don’t follow each other.  Here’s a list of some common Twitter chats for writers and readers.  If you participate in these themed conversations (Young Adult books, publishing industry, urban fantasy, etc.), you’ll often pick up new followers as well.  To follow the conversation, either set up a search for the hashtag within TweetDeck or use something like TweetChat.

When you start following someone, @ reply them to tell them why.  @So-and-so recommended them on #FollowFriday, you loved their blog post you’d seen from @so-and-so’s re-tweet, you liked their answer in the chat, you love their books, whatever.  They’ll be more likely to check out your tweetstream and potentially follow you back.  If you’re Twitter buddies with @so-and-so, they might even pop into the conversation (since they’d see their ID mentioned) and put in a good word for you.

If you’ve hung out on forums, blogs, or Yahoo groups, you know those formats frown on the “me too” posts, as they don’t add value and clog up the topic.  But Twitter is different.  We all have different lists of followers and following.  So an RT of someone’s comment with a “Ditto” or “Me too” is perfectly okay on Twitter.  It broadens the original poster’s reach and gives you something in common.

If you have an answer for a question posted by someone, jump in and answer it.  Yes, even if it was posted by an agent.  They posted the question to get answers, so you’re allowed to @ reply them.  If you’re behind on tweets, check with them and see if they’re still looking for answers.  Or if you don’t have an answer, you can re-tweet it and get credit for trying to be helpful.

In addition to all these ways of continuing conversations and responding to tweets, you can also start conversations.  Post links you find, talk about your day or observations, ask questions.  Let your followers get involved.

Okay, what things did I miss?  Can you think of any other suggestions?  Do you think these approaches are doable?

definitely doable and i learned something new today. i shall tweet this to my 1million followers

LOL! Thanks! And congrats on having 1 million followers. 😉

Thanks for stopping by. I hope it’s helpful to you!

This is so great. This morning I was looking at all the Tweets and wondering to myself if it was rude to jump in on someone’s conversation. I see all these people chatting back and forth and I didn’t know how they managed it. Very timely! 😀

Yay! I’m so glad this is helpful. Just like at a mingling party, it wouldn’t be a good idea to jump in with rude comment, but if you have something interesting to add (or even just a “Me too”), those are completely allowed. 🙂 Good luck!

Thanks for the great post. I was always told not to really jump into any conversation unless it was one you would actually jump into in person, but this makes me feel a bit better about it. 🙂

Yep, in person–even at a mingling party–I wouldn’t necessarily jump into a conversation where I didn’t know anyone. But with Twitter, you usually start following someone for a reason: you have something in common, you know people in common, etc. So the people you’re following are more like potential friends that you just haven’t been introduced to yet. But Twitter is a really lazy host and doesn’t do introductions. 🙂

This was an excellent post. I remember having a lot of these concerns when I started getting into Twitter, and really feeling like I didn’t need yet another venue to feel like an outsider. I wished I’d had this post back then to explain Twitterquette so clearly.

A lot of people who haven’t joined the conversation look at it and just don’t get it. Because it’s hard to get just by looking at it. I once described it to someone as being at a party with a lot of little groups having small talk all around you. You mingle. You lean over someone’s shoulder, make a comment, move on. Or you become involved in a meaningful exchange–for a few minutes.

I thought your advice about the difference between Twitter and forums was especially useful. Yes, you’re not cluttering up the thread here. And you know, sometimes, I really do care what you’re having for lunch, or that you’ve just realized your socks don’t match.

Thanks for the comment! Yes, it’s hard to explain why even those little things matter (like the socks or whatnot), but they do. In my posts last week, I tried to explain it with the analogy of listening in to your co-worker’s mutterings through the cubicle wall. With Twitter, we can feel like we’re in the same place and sharing something, even though it’s all virtual.

That’s why so many of my suggestions are about making people feel validated, even in mundane ways. In a cubicle farm, we’d laugh if our co-worker made some droll comment about their socks – and they’d feel validated. I’m just trying to bring that same community experience to Twitter. 🙂

Great Post! I’m linking this to my FB group for all of the new writers that are just starting their social media adventure. Thanks!!!

And thanks for the link (and for letting me know…I don’t know if it’s me or FB, but I find it impossible to track when someone links to me there 🙂 ). Heaven forbid I want to know so I can Thank people. LOL!

That was incredibly useful information. What a difference a dot makes 😉

Thanks! Yep, sometimes it’s the little things. And sometimes we don’t even know how much we don’t know. 🙂

When can you teach a class on this? No, I’m not kidding. This is FABULOUS information for me and I just can’t absorb it all in one sitting, lol! It would be nifty to have a class where you teach us how to tweet each other, and retweet each other – or maybe that’s just too dumb? Sigh…

No, not too dumb. 🙂 But I think stuff about the basics of Twitter already exists, and I’m not big on reinventing the wheel, so I like focusing on things I haven’t seen talked about before. However (and I haven’t gone through this myself to see how good/useful it is), you might try checking out: http://mashable.com/guidebook/twitter/ . It’s a place to start for the Twitter basics anyway. If you have specific questions, ask away and I’ll see if I can help.

[…] with Twitter, check out this by @MarianSchembari and this by @mashable, as well as my posts here, here, and […]

[…] awesome writing community, if I really care about the people I reach out to, if I mean it when I tweet my Yay‘s or *hugs*—or if I’m just faking it—believe.  Just believe.  Or I’ll have to get even more […]