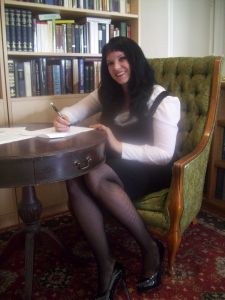 Last time, Kristen Lamb guest blogged for me about how Twitter can be a writer’s BFF.  And maybe some of you weren’t convinced.  (Really, Jami, we know you’re just trying to justify your time on that thing.  Of course a social media expert would say social media is important.  Duh.) So I brought back-up with me today—Ha!

This time, I’m thrilled to introduce Mercedes M. Yardley, a friend I met through (wait for it…) Twitter.  She has the ultimate Twitter success story to share with us, so take it away, Mercedes…

How I Got My Agent: A Social Media Love Story

You know the story.  Author meets agent.  Author stalks agent.  Agent realizes that Author is everything that Agent ever wanted, and stardust falls from the sky as contracts are signed.

Well, this story isn’t really like that.  It’s even better.

Twitter took me a while to get used to, I’ll tell you that.  It’s like having a conversation with 700 of your closest ADD friends.  At the same time.  But once I got the hang of it, I was hooked.  I use Twitter as a reward (“Yay! I finished my project and now I can play! What’s up, Twitter?”), a resource (“Does anybody here live in New Haven, CT? What’s your weather like RIGHT NOW?”), and as a place to meet new writers.  I follow those in the publishing industry.  I follow agents.  I follow established writers and those who are in the same boat I’m in.  It’s a blast.

One day, after my work was done, (and that’s the key, right there.  Don’t let Twitter distract you from your priorities) I was having a Twitter conversation.  Meanwhile, snippets of other conversations were popping up, and somebody tweeted a link to a Query Tracker contest.  And I?  I pounced.

Query Tracker was announcing that agent Jason Yarn from Paradigm was going to judge a query contest.  But not just any contest!  You had to sell your entire novel in a one line pitch and your first paragraph.  A one line pitch? Are you kidding me?!  Condensing an entire novel into a query letter was hard enough, but this?  This was a challenge!

The contest was limited to 100 people, so time was definitely a factor.  It filled up very quickly.  If I hadn’t seen the link right then and jumped on it immediately, then I would have lost my opportunity.  Although I didn’t win the contest, Jason was intrigued enough that he asked me to send my query and first ten pages.  Then my full.  Then The Call, which turned out not to be The Call, but A Call.  Then The Real Call.  And the rest is history.  Or at least, it will be.

I’d like to think that, barring this opportunity, I would have eventually sent Jason my query and he would have shouted, “Hallelujah, this is the query of my dreams!”  It could happen.  But I’m also realistic enough to know that timing really is essential.  By the time I finally carefully researched him (hello, Jason Yarn is way back in the “Y” section) and sent my query in, would he still be looking for this type of manuscript?  Would he enjoy the whimsy, or would I perhaps catch him on a bad day and get a rejection?  Luckily it’s a scenario that I don’t have to think about.  I had an eye on Twitter and it helped me land a fantastic agent.  There really isn’t a stronger argument for social media than this.

*sniff*  I love happy endings!  Thank you so much for sharing your story, Mercedes.  (Check out the picture of her signing her agent contract above!)

And that, my friends, is just one reason why Twitter can be an invaluable resource for writers.  Whether I’ve convinced you or not, you might also like to check out some of Mercedes’s writing on her blog, called Stilettos and Shirley Temples.  Along with our mutual friend, Simon C. Larter (at least, I think they’re friends, sometimes it’s hard to tell), she’s writing a tale that deserves to be made into a movie.

If you use Twitter, what’s the best thing that’s happened to you because of it?  If you don’t use Twitter, did this convince you yet?

Mercedes M. Yardley wears poisonous flowers in her hair and writes whimsical horror.  Her short story “Werewolf 101” was just released this month in John Skipp’s Werewolves and Shape Shifters: Encounters with the Beast Within anthology alongside stories by Neil Gaiman, HP Lovecraft, Chuck Palahniuk, and Charlaine Harris.  She’s still jumping up and down over it.  Mercedes works for Shock Totem Magazine and is represented by Jason Yarn of Paradigm Talent Agency. Come swing by her blog at A Broken Laptop.  They eat cookies and sing songs there.

Of *course* Mercedes and I are friends. We just stab each other now and then, that’s all. Don’t all friends do that? 😉

*whew* Glad to hear that you’re friends. I’d hate to think the stabbings were anything malicious. 🙂

I knew I was playing this twitter game wrong. Note to self: do things before you log on.

Thanks for stopping by! The good news is that unless you’ve sullied your name with mean and nasty things, most mistakes in the social media branding arena can be corrected. Sometimes people’s short attention spans are good. 🙂

What a great story! As you know, I’m a firm believer in the power of social networking. Without my blog, I may not have landed my agent, so I’m all for putting yourself out there.

Yep, you have a great story too! Social media is just the latest iteration of “and they told two friends”. Historically, word of mouth has always been successful, so everyone should take advantage of it. 🙂 IMHO.

[…] MY AGENT THROUGH TWITTER, and then she asked me to write a guest post about it.  Which I did.  Won’t you come and read it? Pretty […]

Simon and I are the best of murderous friends. It’s in our freely flowing blood.

Thank you so much for having me, Jami! Yay, social media! 😀

You’re welcome! Yes, Yay, social media. 🙂 When I first started on Twitter, I never would have guessed at the benefits. I think all the jokes about the worst of Twitter (the inanity) make people dismiss its true potential.

Great post and story, Mercedes! My problem is that I’m just so introverted that twitter is tough for me.

You? Introverted? I don’t believe it. 🙂

Yes, Twitter takes some getting used to. I imagine it like a huge social mingling room. Just like a mingling situation, if you see/hear a conversation you want to be a part of, jump in. If they wanted the conversation to be private, they could have taken it to email or Direct Messages. So it does take a certain amount of extroverted-ness to insert yourself into a conversation with people who don’t know you, but in general, if you have something worthwhile to say (not just a “me too”), they’ll respond to you. And if they don’t respond, no one but you will notice. 🙂

@Jami: I’m SO introverted it’s sinful. 😉 You like that one, did ya?

Okay, Mercedes, spill. What was the one line that hooked/interested your agent? Inquiring minds want to know.

I felt that way at first, too, Murphy. I used to ask people if I could follow them, and they were like, “You’re asking? It’s Twitter! It’s a free for all!” “Eavesdropping” is totally allowed. Come hang with us. It gets a lot easier. 🙂

The line was basically the hook to my query letter (thank goodness I had written and polished my query, right?!) and I think it was something like:

(Main Character’s name) is destined to be murdered, so naturally things go awry when she befriends a tortured musician, a flirty market fish-thrower, and a starry-eyed hero who is secretly a serial killer bent on fulfilling her dark destiny.

Normally I wouldn’t have so many adjectives in one sentence, but I had to cram as much info into one sentence as I could! 😉

Thanks for sharing. And don’t worry, Murphy *loves* adjectives. 🙂 Hmm, destined to be murdered and the hero is the serial killer/murderer. That definitely captures the “whimsical horror” aspect of your voice. Great job!

Thanks for sharing, it sounds awesome. And adjectives? *insert sigh of pleasure here* I love, love, LOVE them! 😉

Mercedes you already know how cool/kind/strong you are…but I’ll tell you again!!!!!

Thanks for stopping by! I know, isn’t Mercedes great? 🙂

Yep, Mercedes did great! (I had to think about your comment for a minute, as my critique partner, Murphy, sometimes goes by M. LOL!)

One of the things Mercedes said to me about this series was that she pictured all of us Twitter-lovers in a circle, jumping up and down, yelling, “Yay, Twitter!” (I’m paraphrasing. 🙂 ) I kind of feel like that right now with all these supportive comments.

BTW, nice library in the background of the pic. And that looks like a comfy chair. 😉

That’s right, gosh darn it. All that socializing is *work-related*. 🙂 Thanks for visiting!

Hi!
I came over via Mercedes blog ;o) OMG I love Mercedes, we also met on Twitter. She’s an excellent and fun tweep! This is a great story I didn’t know about. That’s awesome!!

Hello!
I followed over via Mercedes blog! Great blog here, Jami ;o) I didn’t know about that story. That’s awesome! I know Mercedes on twitter as well. Twitter rules!!

Have a great weekend ;o)

Thanks for visiting! Aren’t “how I got my agent” stories inspiring? And when they justify Twitter-time? Woohoo!

You guys are so awesome! I love my Twitter friends. Seriously.

Yes, Mason, what a wonderfully cosy and comfortable chair! Look at all of the amazing books! I wonder where this amazing picture was taken?? 😛