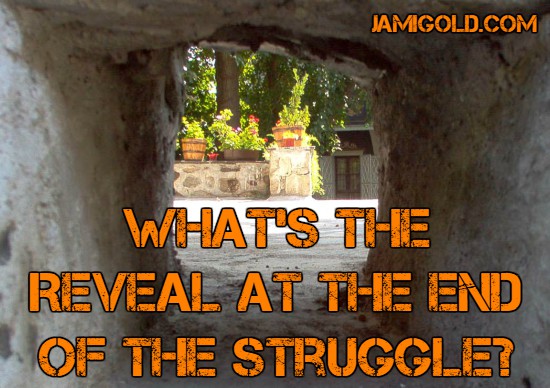 As we’ve talked about before, some stories feature more of a plot, and some feature more about characters. Other stories mix-and-match those elements, such as being plot-driven but character-focused.

No matter what we write, however, the point of our stories usually rests more on our characters than our plots. In fact, we might have heard that the purpose of the plot is to reveal character.

For some, that might be a controversial statement. So let’s take a look at what “plot reveals character” means and how understanding that idea can help our storytelling skills. *smile*

What Is a Story?

First, to explore the idea of how plots and characters interact, we need to define the word story. Sure, that seems like a basic place to start, but many writers—especially when we’re new—don’t understand what a story is as well as we should.

A story is not the plot. Some writers create overly plotty query letters or story descriptions, thinking that the plot events are the story. But the plot isn’t the point of the story.

Instead, we need to understand that a story is about our characters’ struggle. The plot is merely the events that create that struggle. In other words, plot is a tool to reveal the character and the choices explored in the story.

A Story Is Defined by the Story Problem

Don’t believe me that stories aren’t about the plot? Let’s take a plot idea: An asteroid is coming to smash the Earth to smithereens. That’s a huge plot event that creates a struggle. All life is at risk, right?

Okay, but what about it? Who’s doing the struggling against those consequences?

Without characters, that asteroid’s just going to do its thing, same as it would on an uninhabited planet. Boom, crash, the end. There’s no story there because there’s no story problem there—no characters attempting to overcome the obstacles of the plot.

In order to have a story, we have to bring in characters who face a problem. And it’s only when we decide who our characters are or the choices they’ll face that we’ll know what our asteroid story is:

Each of those character examples defines a story problem—they want to destroy, decide, or reach out and heal. In turn, the story problem defines the story, as the characters attempt to solve their problem.

Each character will react differently because they have different wants and needs and fears and beliefs. They’ll see different potential solutions to their problems. They’ll make different choices in pursuit of those solutions.

For all of those examples, the inciting plot event—an asteroid is coming to smash the Earth—is the same. It’s the different characters and choices that create a different story problem and struggle—and thus a different story.

What’s the Purpose of the Plot?

So at this point, we might think that from a storytelling perspective, the plot almost doesn’t matter. *smile* That can be true to a point—after all, we can change the plot events to increase stakes and whatnot and still have the same story. However, that observation hints at the purpose of the plot.

What's the purpose of our story's plot? And how is it supposed to “reveal” our characters? Click To TweetLet’s go back to our asteroid example. Imagine that the asteroid wasn’t big enough to wipe out all life after all. In other words, what if it were a smaller plot event?

If the asteroid is only big enough to cause a few cloudy days, our characters would have no reason to make the big emotional choices in the bullets above, such as turning to a life of crime. Focusing on smaller emotional choices might be fine, depending on the kind of story we wanted to write.

But if we wanted to explore bigger emotional choices or force bigger arc changes and growth, we might need a bigger trigger. That’s where plot comes in. Plot events are the triggers forcing choices and changes in our characters.

What’s the Plot in Literary vs. Genre Stories?

This perspective of plot helps us better understand the structure of literary stories too. In genre stories, the plot events are usually obvious: asteroids, murder mysteries, characters meeting and falling in love, etc.

However, literary stories still have events or obstacles forcing characters to make choices (even if that choice is to remain passive and avoid action). The plot is still enough to reveal characters, and that’s what counts.

In fact, it’s often in any story’s quieter moments that a character is revealed the most, as they contemplate what the plot events mean for them and their goals. Those moments provide evidence to readers of who our characters are, through their reaction to the obstacles in front of them.

This brings us back to the idea that “plot reveals characters.”

We need a plot and plot events and obstacles that force our characters to make the kind of choices we want to write about. In turn, those choices reveal who our characters are.

Obviously, we could come up with countless plot events to force those choices, from asteroids to a job loss. And that’s yet more proof that plot isn’t story, given that plots so different could result in similar stories of character traits revealed.

The story is in the reveal. The reveal is triggered by the plot.

What If a Plot Doesn’t Reveal?

Sometimes we might read a story where the plot doesn’t reveal anything about the characters. That’s not an “Ah-ha! Jami’s wrong!” That’s a failure of the plot. *smile*

If our characters aren’t being revealed…

It’s easy to get wrapped up in convoluted plot twists that feel like story. However, a story isn’t just a series of superficial plot complications that need to be checked off a list to “unlock” the end of the story. Plot events need to be part of a cause-and-effect chain and not just “and then this happened.”

How Can This Understanding Help Our Writing?

If we understand what story is—and isn’t—how does this help us?

If we’re comfortable writing by the seat of our pants to some extent, we could experiment with letting our characters take the lead and show us what their story problem and choices are. Once we establish the premise and/or inciting plot event, we could then let them tell us what the rest of the plot is.

But even if we don’t want to leave our story in our characters’ hands, we can still check our plot…

In other words, is our plot contributing to the larger story? Or is it trying to be the story?

Our stories are made up of many elements, from characters and plots and antagonists to stakes and motivations and goals. When all the elements work together to form a greater whole, our stories will be stronger and more compelling. *smile*

Have you heard of the saying “plot reveals character” before? Did you have a strong understanding of what that meant? Does this post help you see how plot contributes to but isn’t the story? Do you disagree with my perspective on plots vs. characters and how they relate to stories or have a different perspective? Can you think of other ways a stronger understanding of plots and their purpose can help our writing?

Great post – I strongly dislike books which have an obligatory-feeling twist at the end of every chapter, and those ones seldom change the character much because the author is too busy conjuring up elaborate and unlikely twists. Well written characters can carry even a weak story.